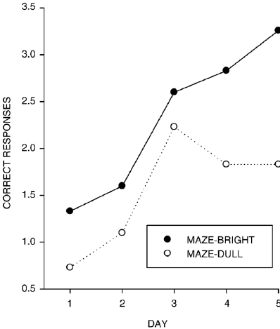 In the elevated T maze experiment (the two arms were interchangeable and one was painted white while the other was painted black), a correct response was recorded when the animals went to the darker platform (in order that the animals do not simply learn a position response, the position of the darker platform was varied throughout each day’s run.)

Even if you haven’t heard about this study you might have guessed by now:
The study subjects were not the rats but rather the psychology students unknowingly became subjects themselves!
In reality, all rats were standard lab rats which did not actually differ significantly in their inherent attributes, and were randomly assigned to the “dull” and “bright” conditions. However, the results showed that the rats labeled as “bright” learned the mazes more quickly than those labeled as “dull.” Apparently, the students had influenced the performance of their rats, depending on what they had been told. Importantly, these students were not cheating or purposefully slanting their results. The influences they exerted on their animals were unintentional and unconscious.
Rosenthal is now well known for his research on experimenter expectancy effects, the influence that a researcher can exert on the outcome of a research investigation. As a result of such research, the threat of experimenter bias to scientific research has been well established. These experiments demonstrate how important it is to use careful procedures (such as blinding and randomization methods, in which the experimenters who come in contact with the subjects are unaware of the hypotheses of the study) to avoid most of these expectancy effects.