Open-access publishing has grown dramatically, with a linear increase in the number of articles published, from about 53,000 in 2010 to 420,000 in 2014 (Shen and Björk 2015). This growth has been accompanied by a proliferation of so-called “predatory journals” (Beall 2012) or “pseudojournals” (McGlynn 2013), estimated to comprise 25% of open-access journals (Beall 2012). Figures 1 and 2 below show the growth over time in the number of predatory publishers and predatory standalone journals, respectively. 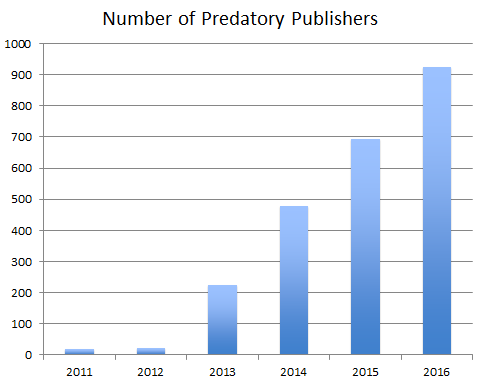 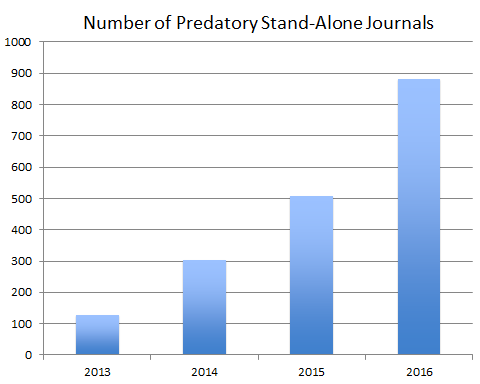 Beall has catalogued both predatory publishers and predatory standalone journals by applying a list of 28 criteria to evaluate a journal’s editor and staff, business management, integrity, and other features. He also provides a list of 26 poor journal standards and practices that although not predatory criteria, should give potential authors pause before submitting their manuscripts to a journal (link).

Publishers of these counterfeit journals aim to exploit the gold open-access model, in which the author pays for publication of an article. According to Beall, “…predatory publishers are dishonest and lack transparency. They aim to dupe researchers, especially those inexperienced in scholarly communication. They set up websites that closely resemble those of legitimate online publishers, and publish journals of questionable and downright low quality. Many purport to be headquartered in the United States, United Kingdom, Canada or Australia but really hail from Pakistan, India or Nigeria. Some predatory publishers spam researchers, soliciting manuscripts but failing to mention the required author fee. Later, after the paper is accepted and published, the authors are invoiced for the fees, typically US$1,800. Because the scientists are often asked to sign over their copyright to the work as part of the submission process (against the spirit of open access) they feel unable to withdraw the paper and send it elsewhere.” (Beall 2012).

Shen and Björk used Beall’s list as a starting point to examine in detail a multistage stratified sample of predatory journals.  They estimated that about two-thirds of the 11,873 journals (i.e., about 8,000 journals) that they identified as predatory were active, in that they published at least one article (Shen and Björk 2015). The remaining one-third consisted of empty journal websites, which were most prevalent among the journals from publishers with portfolios of 100 or more journals. These empty placeholder journals are characteristic of predatory publishers that establish journals without content to flesh out their portfolios.

Predatory journals exploit the need among scientists to publish their work, which is required for academic advancement. Such journals fail to provide peer-review of submitted articles, often accepting them immediately with a request for payment of a publication fee. The absence of peer-review results in a flood of substandard works that pollute the scientific literature. The lack of peer review by many of these journals was evidenced in a study conducted by a contributing correspondent at Science, who submitted fake papers with blatant scientific flaws to 304 open-access journals (Bohannon 2013). At the time of publication, the fake articles were still under review at 20 journals and 29 of the websites were abandoned, leaving a total of 255 journals, 121 of which were on Beall’s list of predatory journals. Only 98 (38.4%) of the journals rejected the articles and 157 (61.6%) accepted them.  Among those on Beall’s list, 82% accepted the fake articles. Of note, other journals that accepted the article were published by reputable publishers, including Elsevier, Wolters Kluwer, and Sage. This state of affairs, Caplan (2015) has argued, helps to erode public confidence in the medical profession, devalue legitimate science, and undermine public support for evidence-based policy (Caplan 2015). Until recently, there seemed to be no redress for these practices. However, On August 25, 2016, the U.S. Federal Trade Commission filed a legal complaint against the OMICS Group, among the largest of the predator publishers, for allegedly deceiving scholars and misrepresenting the editorial rigor of its journals. This came as a response to a growing number of calls from academics for action to be taken against publishers that take advantage of scholars wishing to publish in open-access journals. The action seeks both to obtain monetary relief for researchers that have published with OMICS and to prevent the publisher from further violations. It is likely that this will have a chilling effect on the practice of predatory publishing. However, in journal publishing, as in much of life, caveat emptor!